COVID-19 and the legal system. Your questions answered. 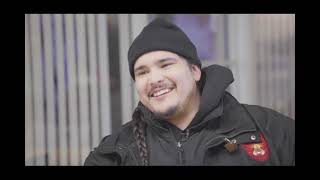 Mack was arrested while hunting on his ancestral territory and charged with a harvesting offence. As a status Indian, Mack has Aboriginal harvesting rights.

What are Aboriginal harvesting rights?

Who has harvesting rights?

Who has harvesting rights?
True
False

Harvesting rights apply to First Nations and Métis, and they are of great cultural, social, and economic importance.

Mack is a status Indian and Gitxsan. Harvesting rights on his community’s territory are protected.

Status Indians who are BC residents don’t need a licence or permit to hunt animals or migratory birds, trap, or freshwater fish.

If you’re harvesting, it must be :

You must also follow conservation, public health, and public safety regulations, and any laws your First Nation may have about harvesting.

BC regulations don’t recognize the right of non-status Indians to hunt, trap, or freshwater fish without a licence. You may still have an Aboriginal right, but you may be charged for using this right without a licence. To avoid being charged is to buy a hunting or fishing licence and follow all regulations.

What if I've been charged with a harvesting offence?

What if I've been charged with a harvesting offence?
True
False

Call Legal Aid BC to find out if you qualify for services.

What if I'm not eligible for a legal aid lawyer?

You might be able to discuss your matter with duty counsel who provide free legal advice.

You might also be able to get legal information and support from:

If you're willing to take responsibility for your actions, you might be able to participate in an Aboriginal restorative justice program.

You, your community, and those affected by your actions will work together to restore harmony and move forward.

To participate in a restorative justice program, the Crown counsel must agree to your participation in the program as a way to resolve the charges against you.

Talk to your lawyer about what's best for you.

It’s very important to get legal advice before you plead guilty so you understand your Aboriginal hunting and fishing rights.

If you plead guilty to the charges, and Crown counsel agrees to it, you might be able to have your matter heard in First Nations/Indigenous Court.

A Guide to Aboriginal Harvesting Rights

Legal Aid Criminal Duty Counsel — Lawyers paid by Legal Aid BC who can help people with low incomes with their criminal law issues, give free legal advice, but can’t take on your whole case or represent you at trial

Hunting & Trapping Regulations Synopsis — A summary of BC hunting and trapping regulations made under the Wildlife Act, prepared for hunters and trappers

BC211 — Free confidential referrals to help and information — Call 211